THE USE OF COCOPEAT 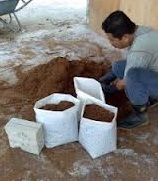 How to use cocopeat?
Cocopeat is a planting media from coconut fiber that shipped in compressed form to reduce transport and handling costs. Converting cocopeat blocks to coir dust is easy process for most farmers. All we need to do is add water to the block and the block will puff up into moist fluffy cocopeat. Just add sufficient water to the block to make sufficient quantity of moist cocopeat. You can put away the not expanded block for later use. In Malaysia most cocopeat are sold in a beg as powder form that is very light and easy to transport and for storage. The use of cocopeat are for planting media especially those farming activities under the rainshelter structure. The fertigation system as a new popular farming and practical farming system in Cameroon Highland since few decade ago. Crops like tomato, cabbage, chinese Kale, Strawberry, Brassica and other temperate commodities are the most grown by farmers. This article I would like to share the use of cocopeat from my observation. 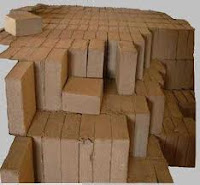 The normal use of cocopeat in foreign country are the use of cocopeat block form. Then if we need to expand the whole block later immerse the block in a large tub capable of holding at least 25 litre of water. Remove the wet expanded cocopeat that floats in the water. As I know, while continuing to add water to the tub till the complete block is expanded. The practice of using cocopeat in Malaysia is in the powder form that normally sold in retail market in less than 10 liter a bag. The cocopeat in the bag are light in weight and easily transported to the nursery area or rainshelter greenhouse. For a large grower who needs to expand large number of cocopeat blocks, place the cocopeat blocks vertically with a distance of about 1 feet between them. Spray water from a hose on the cocopeat blocks while working on the blocks with hand to expand them into moist cocopeat. Another method is to use machinery to crush the block into powder and then use the dust. 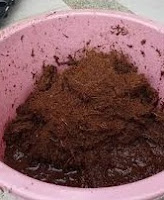 The use of low compression cocopeat for absorption purposes, normally we advise the farmers to simply break and crush the block into powder in the palm of your hand. This method practical for those fragile cocopeat either for locally produced cocopeat or imported cocopeat. The use of cocopeat for potting mix we advise the user to mix the expanded cocopeat with leaf mould or homemade organic manure in the ratio of 1:1. Add red soil or sand in small quantities for large plants, otherwise the cocopeat will not be able to hold the weight of the plants as they grow. Red soil tends to compact over time (despite the cocopeat), so take care not to mix more than one third of the mix. For germination, mix cocopeat, leaf mould and sand in the ratio of 1:1:1. If you are using commercial organic manure, it would be better to mix cocopeat and organic manure in the ratio of 10:1 as commercial organic manures are often of high strength. 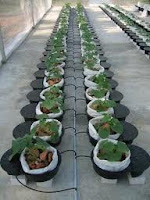 If the cocopeat are the hydroponics medium, the techniques for hydroponics it is better to throughly wash and buffer the cocopeat before use as most of the nutrient formula available on the web are not meant for growing in coir. First expand the cocopeat block as instructed earlier. Wash the expanded cocopeat in a large tub of soft water for a few minutes. Drain the water and repeat the process. If the cocopeat you bought is unwashed, you will have to repeat the process a couple of times more. Dissolve calcium nitrate (available in agri supply stores) in water in the ratio of 1 g per litre and allow the cocopeat to soak in the solution for 12 hours. Drain any remaining solution and wash the cocopeat again in soft water a couple of times. The cocopeat is now ready for use as a hydroponics medium. The use of cocopeat replace the conventional use of topsoil as planting media. More new agriculture technologies are adapted and towards vertical farming system to increas per square meter productivity. The use of cocopeat in Malaysia increase drastically since the introduction of Fertigation Farming System. The sowing technology today depend on cocopeat and peatmoss as efficient and practical medium for seedling preparation.

Labels: THE USE OF COCOPEAT