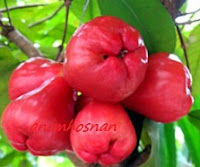 ROSE APPLE (Syzygium jambos) is it a type of berry, a pear or an apple? As I told my friends from Europe, this remarkable fruit is not what it name intends, an apple but in Malaysia are known as JAMBU AIR. It was grown and native to Malaysia since I was plucking the fruits surrounding my house in Muar, Johor for many years. Apparently my friend said that rose apple looks more like a pear and it taste like a watermelon. Actually this rose apple are juicy , red in color and attractive for dish decoration. Now I wonder why many people call it rose apple? Where the does name came from and what exactly is a rose apple? Let’s find out in "Anim Agro Technology" about the not very popular fruits in Malaysia called as Rose Apple for our knowledge.

I presume it was called 'Rose Apple' because of the crispy fruits smell and taste like rose water. I really like to eat this fruits of fully ripe with sweet taste. The scientific name for rose apple actually is Syzygium jambos. While its English name varies not only is it called rose apple it is also refer to as the Malabar plum Plum, Rose Malay Apple Wax Apple and also as Water Apple. My corlicks from Dutch didi mention about this fruit known as Rozenappel ahile in Spanish as Pomarrosa. The French also given a various name to this fruit such as  Jamrosat, Jambrosade, Jam-rose and Pomme rose. In other literatura, I found out that the German called this fruit as Rosenapfel and Malabarpflaume. Even this fruit originate from the South East Asia and its part of the Myrtaceae (myrtle family) but the distribution able to reach South America and Australia nowadays.
ALL ABOUT ROSE APPLE: 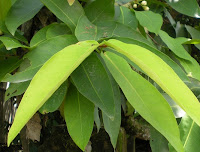 The leathery leaves grow opposite each other on short, thick stems that clasp the twig. They are oblong in shape, narrower at the stem end. They are 2 to 10 inches long, 1 to 6 inches wide. They are pink when young and become dull, light-green above and yellowish-green beneath when mature

A showy terminal inflorescence, usually with four whitish-green flowers on the outside of the crown. The flowers have a faint fragrance and grow in loose clusters of 3 to 7 at the end of branches. The petals are pale yellow, yellow-white or pink and the stamens are uni-colored. In Indonesia the tree blooms twice a year, in July and again in September. The fruits ripen in August and November.

Fruits are about 5 cm long with a whitish-green colour, but colour variations exist including red skinned fruits. The skin is thin and waxy. The rose apple or jambu fruit has a shiny, thin skin which varies from white to light red. About 1 inch long and 1-1.5 inches wide, they are shaped somewhat like a pear with a narrow neck and a wide apex. The fruit curves in and forms a concave indentation from which stiff sepals and the style protrude. The flesh is white or pink, slightly fragrant, crisp and juicy with a faint sweet flavor. The fruit has about 1-3 seeds which, together with the roots, are considered poisonous. Red and white jambu are found in Indonesia. The red jambus are the smallest fruit, sweet and juicy, with the white ones being very acidic. In Malaysia there is a wide variety of color, ranging from palest green, delicate blush pink to deep crimson and a sort of brownish red. Green jambu are very crunchy but not as juicy. 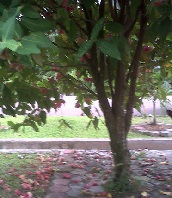 Grow as a shrub or as a medium-sized tree. 7 to 12 meter. Jambu is a small tree or large shrub which grows on the average of 10 to 20 feet in height. Branches grow close to the ground from a short, crooked trunk. The crown is open and non-symmetrical. It likes plenty of rain evenly spaced throughout the year
Climate and weather: Requires a tropical or near tropical climate. Growth at altitudes up to 900 meter. Type of soil: Prefers deep loamy soil. But can tolerate sand or limestone with very little organic matter. Planting Distance: Spacing (close range) 8 meter and Spacing (wide range) 12 meter. Insect pests: Few insect problems. Aphids. Diseases: Sometimes there is visible mould growing on honeydew excreted by aphids. Leaf spot. Anthracnose. Fusarium root rot.

Pick by hand from the tree. The young fruit and ripe fruit are almost uniform in
a bunch. Fruits should be eaten or used soon after picking because they spoil soon. Fruits ripen over an extended period of time in proper cold storage. The price of rose apple in fresh market ranged between RM 4.00 - RM 8.00 per kilogram depending on the freshness, sizes, variety and the location of the shops.

Uses:
Eat the fruits fresh (the skin can be eaten too). Fruits are crisp with the taste (and smell) of rose-water. Fruits are hollow, the core contains a small amount of inedible fluff. I like too eat fresh rose apple during peak season and it fresh from farm. The fruit also processed to make a 'Halwa' and 'Rojak' as dessert. Sayonara! Thanks....
By,
M Anem
Senior Agronomist
Serdang Agriculture Station
Selangor, Malaysia.
(9 JamadilAkhir 1434H)
Posted by animagro at 2:09 PM