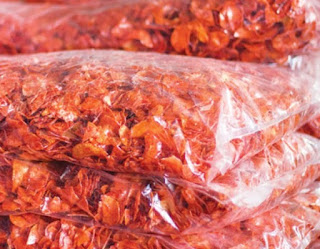 KEREPEK is sold out. So many customers have bought since Raya is just around the corner. If you want, you can help fry and pack them yourself,” said the man matter-of-factly to my father. The blazing sun overhead had driven us to the shed at Kampung Sg. Lang in Banting, Selangor to seek respite and you guessed it, some kerepek pisang (banana chips)!.. My father agreed and promptly started stirring the banana chips already frying in the big wok. The same man instructed him to scoop the chips once done, and showed him where he could vacuum-seal the bag of chips. And that’s how it was the last time you were there. But then you were still small,” shared my dad of Banting’s famous kerepek house, Kerepek Fazz, during my family’s buka puasa (breaking of fast) on Saturday. The ubiquitous kerepek pisang and ubi (tapioca chips) are synonymous with Malaysians, especially during the Hari Raya season. For my family, Hari Raya is never complete without serving these chips to our guests. We’d usually get our stock from Kerepek Fazz. I’ve only a vague memory of that day but I recall the two big woks with the evenly sliced pieces of banana frying in them and the fact that the shed was located next to a traditional kampung house. Intrigued by the story my father told, I take a leisurely drive to the village the next day to meet the man behind this famous kerepek house. As I drive along the newly paved road of Jalan Utama Kg. Sg. Lang Baru, I come across stalls selling kuih Raya (Hari Raya traditional desserts) and kerepek, set up on both sides. The scene is chaotic with cars parked by the roadside, narrowing the road considerably as the crowds swarmed around the displays of food. After few turns which leads me to a narrower road, I finally catch sight of the sign Kerepek Fazz and in smaller fonts underneath it “sejak 1983” (since 1983). This 34-year-old kerepek house is the most well-known place in Banting to obtain this delicious snack. 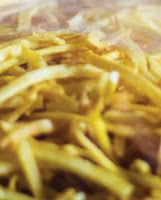 The shop is tucked between two single-storey houses, and the large compound is already filled with parked vehicles. A bespectacled man with white hair and a neatly trimmed white beard appears from the inside of one of the single-storey houses to greet me. He’s none other than Mahmudin Abas, founder and owner of Kerepek Fazz. “Pakcik ni tak pandai nak bercerita. Kalau pandai, pakcik dah jadi penulis kot? (I’m not good at telling stories. If I was, I’d probably be a writer),” he jests as we sit down for a chat. He doesn’t waste any time, beginning his story frankly: “To be honest, there’s no secret recipe or special ingredient,” adding that he simply fries the sliced bananas and while they’re still frying, he adds in salted water. “That’s all! You just need to take care of the temperature while frying them and the timing when you pack the chips,” he explains with a smile before continuing in his lilting Javanese accent: “You can’t overstock the chips. If you sell them late, they will go bad. Then people would complain ‘tak sedap,’ (not tasty).” He advises not to keep the banana chips in the car for too long, as the heat will cause the oil to separate from the chips. If stored properly, he says the chips can last for as long as two months. When business first started, there were only the salty, circular sliced banana and tapioca chips. Presently, there are many varieties of chips, ranging from sweet to spicy, and in different shapes as well. The bestseller remains the round banana chips made from pisang tanduk (banana plantain). “Ramadan time is usually the busiest. Alhamdulillah (praise be to God) business is doing fine. The demand is usually lesser in January, probably because people have already spent their money during the school holidays to travel,” Mahmudin says as we both observe the non-stop flow of customers walking in and out of his shop. 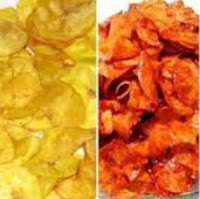 He started the business without any government loan and with no experience in sales and marketing. Born and bred in Banting, this 62-year-old former factory technician recalls: “I used to work shifts, and usually at night, the girls would snack on asam (sour candies) to stay awake. My wife suggested that we fry banana chips for them. They loved it and were willing to pay for more!” Smiling, he adds: “I couldn’t resist so I went on to source for more bananas, made the chips and sold it to them!” The rest, they say, is history. From pisang tanduk, he moved on to a different species of banana, pisang abu. Discovering that the latter takes some time to ripen, he decided to experiment with tapioca. “We fried the thinly sliced pieces and I brought them to my colleagues. It was a hit! So I thought that it had potential. In May 1985, I finally quit my job and have been selling chips ever since,” he tells me with a grin. Two years prior to quitting, he researched on the technical requirements needed to set up his chips business as well as the marketing and production aspects. His main market at that time were the factories located in Sg. Way and Ulu Kelang in Selangor and Senawang in Negri Sembilan. Business was booming. Then the fall came. When the world economy collapsed in 1985, Mahmudin’s business was hit badly. “Factory workers were laid off so there were fewer customers. It hit us hard,” he recollects, his eyes misting over. But there was a silver lining in the dark clouds looming over his business for a while. In 1986, he met a Singaporean exporter who exported Terengganu fish crackers. A deal was struck and he agreed to export Mahmudin’s chips to the UK. The chips received positive response overseas. Between 1987 and 1996, his humble chips have been exported to as far as the Middle East and Australia. From just being a small homegrown business with one cook and five woks, the growing demand led up to 45 woks with nine workers under him. “At one time, I used up 230 large gas canisters until the petrol company sales people came up to Banting seeking me out. They were curious and thought Banting was having a gas leak for us to use up that many canisters!” he recalls with a laugh. At present, the cooking and packing of chips take place at his factory. He admits that the deep fryer technology has certainly helped his business: “We can cook faster and in a controlled environment. This way, we can cater to the growing demand.” He divulges that he has helpers who work around the clock, “if not there wouldn’t be enough to supply.” Thanks. 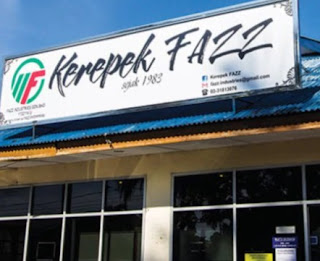