Invasive Alien Species (IAS) as define by the National Invasive Species Council as an alien species whose introduction does or is likely to cause economic or environmental harm to human health. Most countries are signatories to one or more international agreements that include provisions for the protection of biodiversity from the negative impacts of Invasive Alien Species (IAS). IAS is an introduced species and established in areas outside its natural distribution of an area or country. Under the Convention on Biological Diversity (CBD), Malaysia as one of the signatory nation and is committed to develop national strategies, plans or programs for the conservation and sustainable use of biological diversity resources. In Malaysia, the spread of IAS had caused enormous economic and environmental losses such as reduce agricultural productions, harm to human health and destroyed of scenic view. Alien species introduced into the local habitats had caused threats to native species and its ecosystem and their occurrences ranged from various taxonomic groups that include viruses, bacteria, fungi, mosses, invertebrates, fi sh, amphibians, reptiles, birds and mammals. As globalisation and transportation becoming more rapid, expanded opportunities are being provided for plants, animal and microorganisms to move beyond their natural range. Some of the alien species do not harm species, habitats and ecosystem and instead provide significant benefi ts for farmers, traders and nation’s economy. However, some species may become invasive and can be costly for industries, competent authorities, site managers and society as whole. Some impacts on the biodiversity and ecological functions may be irreversible. Thus, the issue and threat of invasive alien species are very real and signifi cant as exemplified by cases such as Papaya Ring Spot Virus, papaya Dieback, Coco Pod Borer, Diamondback Moth, Epizootic Ulcerative Syndrome (EUS) and Koi Herpes Virus (KHV) and many others. They have incurred losses to the agriculture industry amounting to millions of Malaysian Ringgits.

The spread of invasive alien species is creating complex for reaching challenges that need to address through concerted effort among the competent authorities. The action plan proposed on IAS in Malaysia will provide continued efforts to increase the awareness and information to the various stakeholders on the importance of alien species and ways to tackle them in balancing conservation and management
of the resources with continued economic growth. I wish to congratulate the National Working Group for coming up with the Action Plan for Invasive Alien Species and urge all players in this fi eld to come forward and together strive towards achieving the targets and goal of the CBD Program of Work to ensure of the continued sustainable use of the national biological resources. Finally I look forward to the successful implementation of the action plan along with continuing and strong financial support from the Central Agencies of the Government of Malaysia. This article in "Anim Agro Technology". I would to share the information about IAS based on DOA's report.

Status of IAS in Malaysia
There are several incidences IAS invading this country. These incidences had great impact to the agriculture economy affecting crop production, fi sheries and livestock. However, the impact to the biodiversity is not well known judging from feedback of stakeholders. Some of the important IAS that had been establish in Malaysia are: 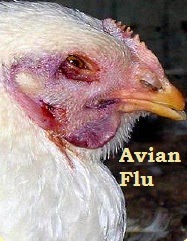 1. Avian Influenza
Avian influenza is a viral disease cause by H5N1. In early August 2004, Malaysia reported its first outbreak of H5N1 in poultry. The other incidences were also reported in February/ March 2006 in the states of Perak and Pulau Pinang. Presently, Malaysia has successfully controlled the disease in the poultry sector and is now considered free of Avian Influenza. There is no report indicating that this disease had infested human in Malaysia.


Info of Avian Flu (From Wikepedia)
"Bird flu" is a phrase similar to "swine flu," "dog flu," "horse flu," or "human flu" in that it refers to an illness caused by any of many different strains of influenza viruses that have adapted to a specific host. All known viruses that cause influenza in birds belong to the species influenza A virus. All subtypes (but not all strains of all subtypes) of influenza A virus are adapted to birds, which is why for many purposes avian flu virus is the influenza A virus. (Note, however, that the "A" does not stand for "avian"). Adaptation is not exclusive. Being adapted toward a particular species does not preclude adaptations, or partial adaptations, toward infecting different species. In this way, strains of influenza viruses are adapted to multiple species, though may be preferential toward a particular host. For example, viruses responsible for influenza pandemics are adapted to both humans and birds. Recent influenza research into the genes of theSpanish flu virus shows it to have genes adapted to both birds and humans, with more of its genes from birds than less deadly later pandemic strains.

While its most highly pathogenic strain (H5N1) had been spreading throughout Asia since 2003, avian influenza reached Europe in 2005, and the Middle East, as well as Africa, the following year. On January 22, 2012, China reported its second human death due to bird flu in a month following other fatalities in Vietnam and Cambodia.  Companion birds in captivity and parrots are highly unlikely to contract the virus, and there has been no report of a companion bird with avian influenza since 2003. Pigeons do not contract or spread the virus. 84% of affected bird populations are composed of chicken and farm birds, while the 15% is made up of wild birds according to capture-and-release operations in the 2000's, during the SARs pandemic. The first deadly Canadian case was confirmed on January 3, 2014.
Read the article on Part 1, Part 2 and Part 3 before. Thanks.