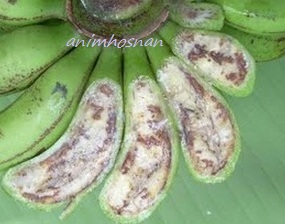 MOKO DISEASE are one of the most recent banana disease occurred in Malaysia. The causal pathogenic bacterium of moko disease or also known as banana blood disease was originally named Pseudomonas celebses in 1923, however none of the original cultures exist and the name became invalid. The symptoms and epidemiological characteristics of blood disease are very similar to those of insect-transmitted strains of Moko disease in Central and South America, caused by race 2 of Ralstonia solanacerum. The disease was to be an abberrant from considered to be an aberrant form of Moko but after the appearance of the disease in Java further investigations showed that the bacterium was in fact different from the bacteria which causes Moko disease. In Malaysia the moko disease appeared in Johor (Southern Peninisular of Malaysia) in 2006 after major flood disaster. Department of Agriculture confirmed the symptom of this disease as moko disease caused by Ralstonia solanacerum in late 2006 after laboratories tests. Various control measures are introduced to the commercial banana growers include to stop of banana planting, the use of free planting materials, an introduction of resistant varieties, burning of infected plants and R&D activities. 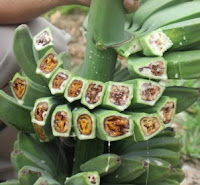 Distribution
Blood disease was first reported in 1906 at Southern Sulawesi in Indonesia. It spread to west Java in 1987 and has since been reported on most of the islands of the Indonesian archipelago (Lombok Island, West Nusa Tenggara , Sumatra, West Kalimantan, the Mouccan Islands and Irian Jaya). Blood disease is not present in Australia. In Malaysia as I mention earlier, the disease was first reported on 2006 in Johor State by DOA technical officers. It later found towards or spreds to northern region at Melaka, Negeri Sembilan, Southern Pahang and now reached to nothern state of Peninsular Malaysia such as Perak, Kedah and may be Kelantan. It was believed that the disease was originated from Indonesian farm workers.

Hosts
The primary hosts of blood disease include most banana species Musa spp, especially cooking bananas (ABB). All plant parts are affected (leaves, roots, stems, fruits resistant to blood disease. Species closely related to , such as and , have not yet been reported as wild hosts, however, it is possible that they are susceptible. 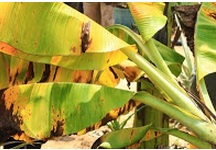 Symptoms
Blood disease causes yellowing of the leaf margins of the and become necrotic. The presence of blackened and is insect transmissible. Fruit may appear unaffected but when the fruit is cut open the pulp displays reddishbrown discolouration and may be rotten or dry. It is this discolouration that gives the disease its name. The discolouration extends from the fruit, through the peduncle down into the rest of the plant via the vascular tissue. Bacterial ooze is visible if the tissue is cut. The discolouration will often be found throughout the mat and in the new suckers of an infected plants.

SpreadBlood disease is insect transmitted and is estimated to be spreading at the rate of approximately 25 kilometres per year in Indonesia. Though there is little information available on the persistence of the pathogen, the disease is also likely to be spread through infected planting material and plant debris. It is not known whether the pathogen alone can persist in soil but is thought to persist in soil for over a year when associated with plant remnants. Blood disease bacterium can survive in fruit for over two weeks and because bunches can appear normal, they may be marketed and subsequently discarded into backyard gardens by the consumer, leading to further sources of infection. Plant quarantine regulations, including controls on the movement of fruits, need to be strictly enforced to limit further spread.

Potential impactBlood disease of banana has devastated areas of banana production on several of the islands in the Indonesian archipelago; where the disease has caused the abandonment of dessert banana plantations. Crop susceptible varieties, particularly those vulnerable to widespread presence of blood disease in Indonesia and the potential to spread into Papua New Guinea and Australia, blood disease is of concern to producers and quarantine authorities.

ControlThe primary means of controlling blood disease is the exclusion of the bacterium from areas where the disease does not occur. Within an affected area, sanitation measures developed for moko disease are likely to be effective against blood disease. The only effective means of control where the pathogen is present is the eradication of infected plants. The systematic nature of infection of the bacterium means that the pathogen cannot be destroyed without also killing the host plant. As with moko, if blood disease was prevalent in commercial plantations it would be a major problem due to the expensive preventative measures required to control spread of the disease, rather than due to the losses that result. Good cultural practices involving the removal of infected plant material and the disinfection of all tools and machinery decreases the risk of spread of blood disease. Suspect samples of leaves, plants, plant parts or fruit can be sent for testing to the nearest Makmal Jabatan Pertanian and clearly marked as ‘suspect blood disease’ and action to controll started following the SOP.
Reference Source : http://www.agric.wa.gov.au