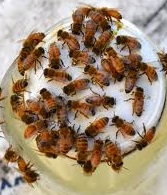 Honey Bee (Apis cerana) and (Apis mellifera) are a type of insects producing honey and other product for many years in many countries including Malaysia. The natural food of the honey bee consists of pollen, nectar or honey, and water. In early wet season before pollen and nectar are available or at other times of the year when these materials are not available for bees in the field or in the hive, supplementary feeding may help the colony survive. This activities is to make it more populous so it will produce more honey or be better able to pollinate crops. All carbohydrate foods are not equal in nutritive value for bees and some are toxic if not properly handle. Cane sugar (or Gula Pasir in Malaysia or dry or sirup) and other form of sugr such as corn sirup are suitable carbohydrate supplement foods for bees. Many people do not understand the suplementary sugar sirup as to produce honey rather than to provide the bee colony basic food requirement.

How to prepare the Sugar Sirup foe Honey Bee?

1. Cane or beet sugar sirup.- Mix one to two parts of granulated sucrose with one part water (preferably 49º to 66º Centigrade).

As practice, for the queen and package bee producers feed their colonies sugar sirup to stimulate brood rearing for the production of queens and package bees to meet early shipping date schedules.  When package colonies are established on empty combs or comb foundations, they should be fed thick sirup (two parts sugar and one part water) for 2 or 3 weeks. Thin sirup (one part sugar and one part water) should be fed for gorging package bees prior to release into hive equipment. For almost any leakproof container (such as a trough, tray, pan, or tub) with an adequate surface area may be used to supply sugar sirup outside the hive. Ensure the sirup do not expose to heavy downpour or direct sunlight. Material such as rocks, pieces of wood, Holland peatmoss, or similar material on which bees can stand while imbibing these materials should be placed in the container. Open feeders should be covered with a roof to protect sirup from rain and other precipitation. The are possibility that the wild animals or birds become a problem. If that so, provisions must be made to keep them out of the feeder by protection precaution measure. 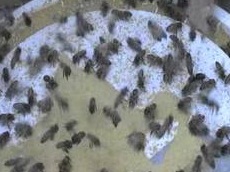 Sugar sirup can be supplied to bees inside the hive by one of the following methods.


1. In a plastic bag feeder.
– The bag encloses much of one or two of the frames in the lower or outer edge of the brood nest, and can hold as much as 10 to 15 pounds of sirup. Bees feed from the upper opening, somewhat like they do from a division board feeder.

2. Combs within the brood chamber.
– When some of the combs in the hive are essentially empty, as commonly occurs in the spring, sugar sirup can be poured directly into the cells with a sprinkling can.

3. Friction-top pail.
– Several such pails can be placed simultaneously on the top bars of the frames over a colony. An empty hive rim should be placed above the combs of the colony to accommodate the pails and the hive cover placed over all.
4. Division board feeder.
- This is a small box-like container that replaces a comb in the brood nest suitable for feeding sugar sirup to colonies in early spring or late fall.

In commercial operations, where large numbers of colonies are kept at one location, 500- to 1,000-gallon tanks connected to a metal pan can be used for supplying sugar sirup and water to bees. When colonies must be fed sugar sirup to augment wet seasons, this feeding should be completed by October to December. The following precautionary measures should be taken when feeding sugar sirup to bees: (1) Feed late in the day, (2) disturb the bees as little as possible, and (3) limit the size of the area (entrance) where bees enter and leave the hives.  Therapeutic drugs may be incorporated in sirup for treatment and control of bee disease; however, never feed any therapeutic drugs in candy or sirup to a colony during a honey flow or 5 weeks prior to the start of a major honey flow. (Feeding therapeutic drugs in candy or sirup at these times may contaminate the surplus honey with both sugar and the drug.) 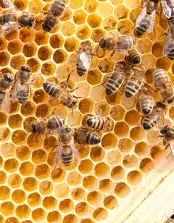 To prepare cane or beet sugar candy, mix one part granulated sucrose with one part water and heat this mixture until it becomes the thickness of fudge (softball stage). Pour the candy mix on waxed paper and allow it to cool and harden. Feed the candy to bees by placing it on the frame top bars.

As an emergency measure in late winter, when it is too early to feed sugar sirup, bees may be fed dry sugar by placing a pound or two on the inverted inner cover. Some beekeepers increase the feeding space by providing a wooden rim on top of the inner cover. The bees should have access to water while being fed dry sugar.

By,
M Anem
Putrajaya
Malaysia
- Adopted from Bee Technology Books
(8 November 2012)
Posted by animagro at 6:28 AM