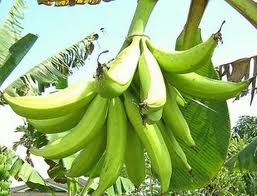 Talk about Banana?
Banana (Musa spp) are planted in a sizable area, about 29,754 hectares in Malaysia in 2011 and it was the second largest local fruit planted after durian. The major banana producing states are Johor, Pahang and Sarawak They are mostly smallholder owned and grown as mono-crop, mixed crop and, in a few instances, inter-cropped with the perennial industrial crops. Private sectors have also ventured into large-scale production of the crop and whose plantations may stretch into several hundreds of hectares that utilize the state-of-the-art production technologies. Banana production has only increased marginally, i.e. from 262,235 metric ton in 2005 to 279,762 metric tonnes in 2011 and the average yield hovers around 11.7 to 10.2 metric ton per hectare during the same period. This yield pales in comparison to 25.0 - 36.0 metric tons achieved by banana growers in other countries. This article I will share my knowledge about banana planting status in Malaysia in 'Anim Agriculture Technology' for all readers. 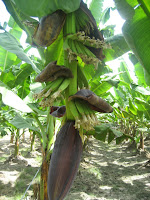 The banana types planted include both the dessert and cooking cultivars. Berangan, Mas, Cavendish and Rastali are examples of the dessert types while the cooking cultivars include Nangka, Raja, Lang, Relong, Tanduk, Nipah and Pisang Awak. Diseases, notably Panama disease and Moko diseases, pose a serious threat to this crop plant. The former has been around in the country for a very long time now while the latter was first discovered attacking the banana crop plant in Johor in 2007 in the aftermath of a severe flood that hit the state in that year. The causal agents of Panama disease, a fungus, i.e. Fusarium oxysporium f. sp. cubense and Moko disease, a bacteria called Ralstonia solanacearum race 2, biovar 1, thrive in moist soil conditions. These wilting banana diseases spread rapidly and retard crop plant growth resulting in heavy yield losses. 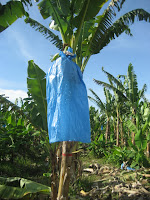 The Department of Agriculture's Diagnostic and Identification services records show that these diseases are prevalent in most parts of the country and almost all banana cultivars are not spared from their scourge. A recent survey of 3212 hectares of banana farms in the state of Johor revealed that 60.7% and 23.5% of them were found to be respectively stricken with the Moko and Panama diseases. Several measures are being carried out to curb these menacing banana diseases. Most important among them being the adoption of good agricultural practices by growers as no other viable control options are, currently, available against these maladies. 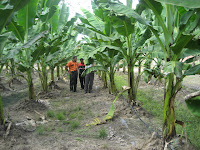 In this respect, the Department of Agriculture recommends the Best-bet practices and an Integrated Pest Management approach for growers to emulate. Essentially, they entail growing disease free planting materials, constant surveillance and vigilance so that affected crop plant maybe detected early and removed and destroyed immediately to curtail the disease spread. Coupled with this, is the need to invigorate crop plant growth so that they may ward off pest and disease intrusions. Increasing farmer awareness and knowledge should not be discounted as this too will, certainly, go a long way in the combat against these virulent diseases. This article I hope able to enhance your knowledge about the status of banana plantation in Malaysia.