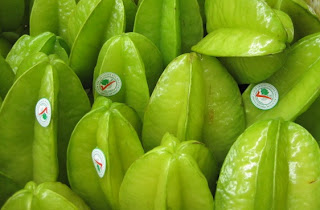 CARAMBOLA (Averrhoa carambola) among popular tropical fruits in Malaysia for domestic and export market. This fruit considered 'Minor Tropical Fruits' from 26 categories. Carambola total export range between 40,000 -46,000 metric ton annually  to Singapore, Europe, Hong Kong and few Middle East Regions. Production of carambola in Malaysia increase from 1,244 hectare (8,572 metric tons of fruit) in 2000 to 1,318 hectare ( 12,934 metric tones ) in 2010. Selangor is the largest carambola producers in 2010 with 6,590 metric tons of fresh carambola fruits  in 2010 from 487 hectares of commercial farms. This morning I would like to share some agronomic practices in carambola farming. 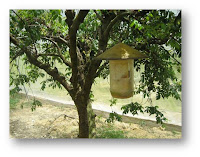 Fruits are attacked by several insects including two species of Fruit flies ( Bactrocera carambolae)  and Bactocera papayae, and two species of lepidopteran borers namely Homona sp. and Cryptophlebia sp. The flowers are commonly infested by the flower moth  Diacrotricha fasciola Zeller. (Pterophoridae).  Mites (Tetranychus sp.) are occassionally a problem in prolonged hot dry weather. Carambola is relatively free of any serious diseases. Occasionally however, during prolonged wet weather in conjunction with dense canopy conditions, the young stems and shoots succumb to thread blight while Cercospora leaf spot causes defoliation as well as spotting on young fruits. The use of chemical and Integrated Pest Management considered the best to control this problems. 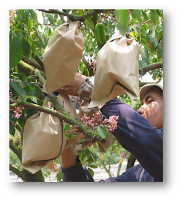 To minimize the economic impact of fruitflies, several measures are taken by the growers to control this important pest. Control programs are based on the use of methyl eugenol, insecticide sprays, poisoned protein hydrolysate bait, and the bagging of fruit. Bagging of fruits is usually done when the fruit reaches a length of 4-5cm, at a stage, which is well before any onset of fruitfly, attack can take place. In the packing-house, holes in the packing boxes are covered with a mesh to prevent fruitfly infestation. Fruits are also inspected twice for symptoms of fruitfly infestation, once during harvest in the farm, and again during the packing and grading processes. 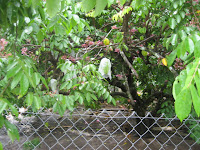 Weeds compete with the crop for nutrients, water and light. They may harbour pests such as thrips, but can also be useful to support pollinator populations. For small farms located near edges of vegetation, complete clearing is preferred to facilitate human movement and sanitation. In large farms, selective weeding is carried out to maintain some vegetation for pollinators to tide over the low-flowering season. Use of herbicides such as glufosinate-ammonium and glyphosate is the most common method, and can be applied before and after planting. 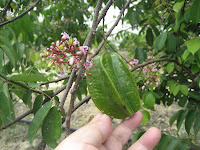 The Carambola tree normally begins to flower a few months after planting. However, it is advisable to allow the plant to reach the age of two years to bear fruits. The ideal production for carambola is from 3 - 8 years of age with proper agronomic practices. From my observation in major carambola commercial farms the yields of carambola normally will produce about 300 fruits per tree at the age of 2 years. Production will increase from year to year until 9 years and above where the production stabilise (about 1200 fruits/tree). The average weight of the carambola fruit is between 17-66 tons/ha for the period of 20 years. In term of seasonality the Carambola tree flowers all throughout the year. But there are 2 main fruiting seasons and 2 small seasons in a year. The two main fruiting seasons are April - June and October - December of each year. One important activity in thefarms are 'Fruit Thinning' in which a number of fruits should be thinned out in order to get good quality fruits and to ease the process of wrapping the fruits. Only one fruit is allowed to each spike. About the harvesting Indices the fruits can be harvested after 45-90 days after flower anthesis and this depends very much on the weather and the clones. Clone B10 needs 60-65 days to reach the colour index 3, whereas B17 needs 77-90 days after the anthesis. During rainy days, the fruits will ripen 2-3 days earlier compared to hot weather. I hope the information able benefit the readers . Thanks.