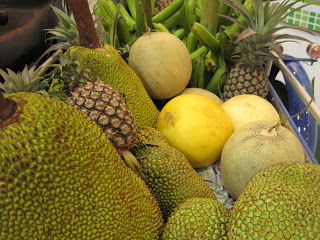 Malaysia grow 270,000 hectare of tropical fruit tree and produce more than 1.7 million metric tonnes of fresh tropical fruit in 2010. Most of the produce are for domestic use and a large portion exported to 18 countries. Durian tree (Durio zibethinus) are the largest fruit grown about 100,615 hectare folloewd by Banana (Musa spp) about 28,640 hecters, Rambutan (Nephelium lappaceum) about 24,470 hectare and Pineapple (Ananas cosmosus) about 16,210 hectare. The most exported tropical fruit produce from Malaysia were Watermelon, Star Fruit or Carambola, Papaya, Pineapple and recently Durian.
TROPICAL FRUIT IN MALAYSIA 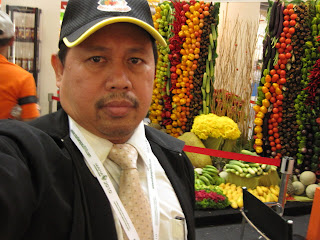 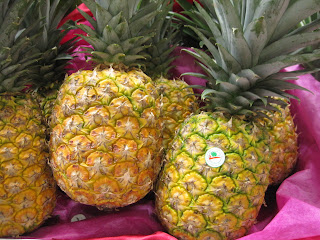 Among popular variety grown in Malaysia are Morris, Gandul (N36), Josapine, Maspine and recently MD2. Pineapple was planted in Johore, Kedah, Selangor and Sarawak with total production 416,710 metrik tonnes in 2010. 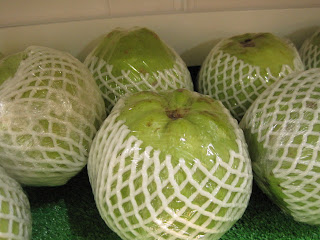 Guava mostly grown for domestic market with a total of 1,440 hectare in 2010 which produce 18,900 mt. of fresh guava. The most popular varieties identified as GU8, GU 9 and GU10. The recent registered varieties was identified as Giant Guava or Jambu Batu Lohan with large fruit size (about 600 gram/ fruit). 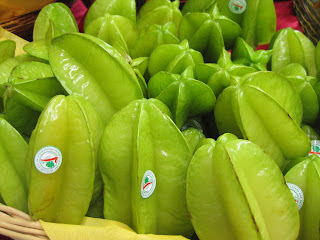 Starfruit or Carambola or locally known as 'Belimbing Besi' grown mostly in Central Region about 1,350 hectare and produce about 11,300 mt in 2010. The most popular variety are B10, B17 and pollinator carambola known as B2. The fruit exported to consumer as medium ripeness level. 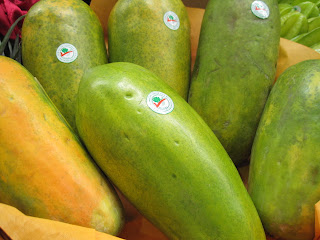 Papaya or locally known as 'Betik' was grown mostly for domestic use and part of it for export market. Only few varieties are gron in monocrop commercial system such as Betik Hong Kong or Betik Sekaki. The other popular varieties was Betik Eksotika, Betik Piola, Betik Subang and Betik Solo. About 3,000 hectare of papaya was grown in 2010 produce about 47,600 metric tones. 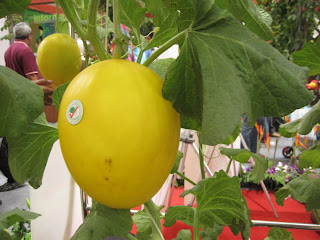 Melon among new commodities grown in Malaysia for domestic and export market. Among popular variety grown in Malaysia are Glamour, Golden Langkawi, Rock Melon and many new imported seeds. Total planted area in Malaysia about 1,150 hectare in 2010. Most farmers growing melon on new are but the others using Netted Rain-shelter Structure.